It’s a fact of life for mountain residents: disruptions and disasters can and will occur. We’re used to temporary disruptions in electricity, phones, and Internet that may last several hours or, at the most a couple of days. But two of the largest fires in Colorado in this millennium occurred in Western Boulder County in the past 15 years, as well as a catastrophic flood in 2013. With no power, no phones, next to no Internet access (the only available internet access was by residents who had solar power and satellite internet), and collapsing or non-existent roads, we were isolated even within communities. 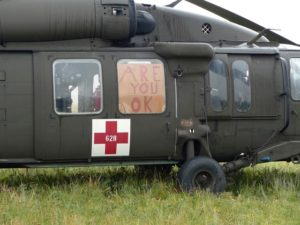 Thus, residents of the AirLink area have experienced three evacuations: two for serious wildfires, and one for the 2013 flood (by helicopter because the canyon road had been destroyed).

The 2013 flood is the event that launched the formation of the AirLink ham radio network in 2014. Since its inception, the Network has been activated for a 2015 flood warning, and for the 2016 Cold Springs Fire, proving its efficacy.

The following are brief descriptions and photos from the wildfires and the 2013 flood:

Thanks to a Foothills United Way grant in 2017, equipment was installed to include Jamestown (the only nearby mountain town not included in the AirLink Network due to topography issues). Jamestown is now able to directly access the AirLink repeater.

Read about it and see some photos: Jamestown Equipment Installation Project

Our thanks to our supporters

And all those who have helped us along the way!